THIS BLOG HAS MOVED!

Effective immediately, this blog has moved to a new address:

Please join me over there! 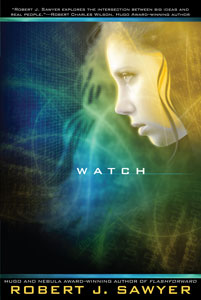 All events are free and open to the public. I'll be reading from Watch, doing a Q&A, and signing books at each one: 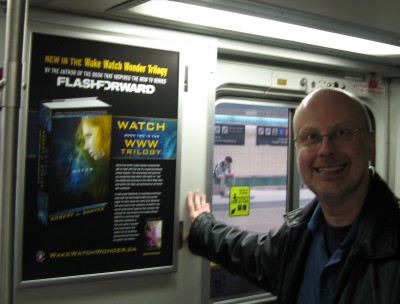 As they did for Wake (see here), Penguin Canada is advertising Watch in Toronto subway cars -- and I happened to be on the subway today, and managed to get these shots. (Thanks also to my friend Lance Sibley, who also sent me a photo that he took.) This is made out of awesome! 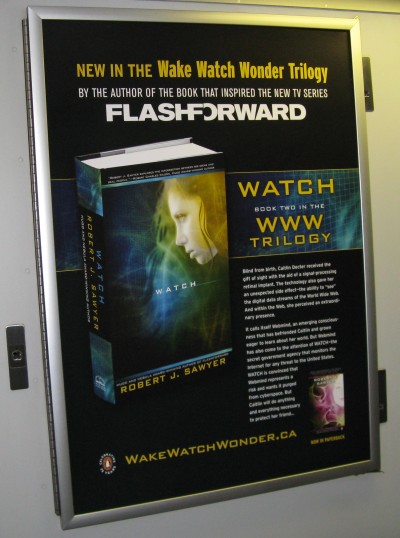 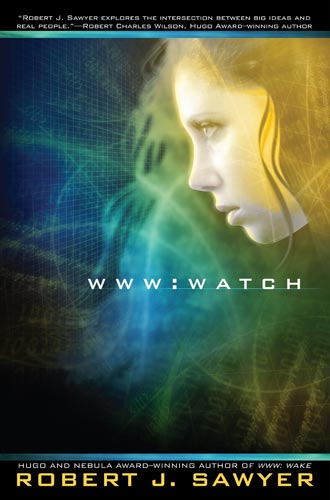 Sawyer shows his genius in combining cutting-edge scientific theories and technological developments with real human characters. --The Globe and Mail 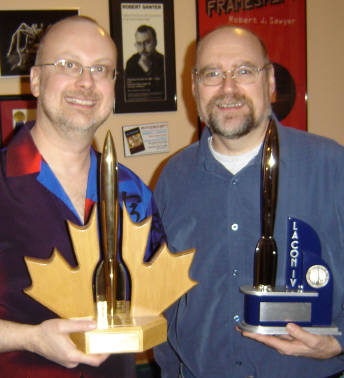 Toronto area-authors Robert J. Sawyer and Robert Charles Wilson are facing off once again for science-fiction's top international honour, the Hugo Award for Best Novel of the Year.

Sawyer's Wake (published by Viking Canada / Ace USA / Gollancz UK) and Wilson's Julian Comstock: A Novel of 22nd Century America (Tor Books) are two of the six finalists for the Hugo, which will be awarded Sunday, September 5, 2010, at a gala ceremony as the highlight of the 68th annual World Science Fiction Convention, which is being held this year in Melbourne, Australia.

Wake tells the story of Caitlin Decter, a blind 15-year-old math genius in Waterloo, Ontario, who discovers a nascent intelligence lurking on the World Wide Web. Julian Comstock is a satiric Victorian-style novel set in a post-apocalyptic Christian-fundamentalist United States.

Sawyer shares an additional Hugo nomination this year in the category of Best Dramatic Presentation (Short Form) for "No More Good Days," the pilot episode of the ABC TV series FlashForward, scripted by Brannon Braga and David S. Goyer and based on Sawyer's novel of the same name.

The Hugos also honour short fiction, and in the novelette category "The Island" by Toronto's Peter Watts is a finalist. In addition, the Hugos honour work in fan categories, and three Canadians are competing there: Lloyd Penney of Toronto and James Nicoll of Kitchener for Best Fan Writer, and Taral Wayne of Toronto for Best Fan Artist. All nominees in all categories are listed here.

Sawyer's Wake is also currently one of five finalists for the Aurora Award, Canada's top honour in science-fiction, for Best English Novel of the Year. Wilson's Julian Comstock is expanded from his earlier novella "Julian: A Christmas Story," which was a previous Hugo finalist.

Both Sawyer and Wilson are previous winners of the Best Novel Hugo: Sawyer took the prize in 2003 for Hominids, and Wilson won in 2006 for Spin. Sawyer and Wilson — known as "Rob and Bob" in science-fiction circles — have faced each other on the best-novel Hugo ballot twice before: both were nominees for the award in 1999 and in 2004. This is Wilson's 6th Hugo nomination, and Sawyer now has 13.

Previous Hugo Award-winning novels include Stranger in a Strange Land by Robert A. Heinlein, Dune by Frank Herbert, The Dispossessed by Ursula K. Le Guin, Ender's Game by Orson Scott Card, A Canticle for Liebowitz by Walter M. Miller, and Neuromancer by William Gibson.

Watch, the sequel to Sawyer's current-finalist Wake, is being launched this Tuesday, April 6, at 7:00 p.m., at Dominion on Queen pub, 500 Queen Street West, in Toronto; the event, which kicks off Sawyer's 14-city cross-Canada book tour for Watch, is free and open to the public.

Join me for the Toronto book-launch party for Watch, the second book in the WWW trilogy, this Tuesday, Apirl 6, 2010, at 7:00 p.m. at The Dominion on Queen pub, 500 Queen Street East (East, not West), Toronto, with book sales by Bakka-Phoenix Books, and the unveiling of the new Watch book trailer!

Admission is free and everyone is welcome!

FlashForward by the numbers 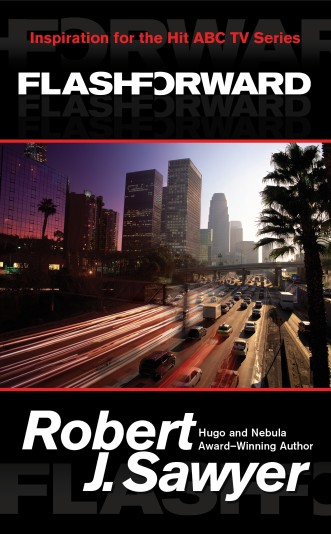 Okay, I won't kid anyone by saying the ratings for the return of FlashForward, the ABC TV series based on my novel of the same name, were what we'd hoped for. But let's bring some clarity to the discussion. Here's a good analysis of how we did from RBR.COM (Radio Business Report / Television Business Report -- "the Voice of the Broadcasting Industry"):

Returning to ABC's schedule for the first time in 3-1/2 months, opposite stiff competition from CBS' NCAA Basketball Tournament and NBC's original 2-hour comedy block, freshman "FlashForward" drew an average audience of 6.5 million viewers during its broadcast.

TV's top freshman gainer this season with young adult viewers via DVR playback, "FlashForward" surges from its first-reported overnight numbers by 1.8 million viewers and by 9-tenths of an Adult 18-49 rating point (+31%), from the Live + Same Day ratings to the Live + 7 Day DVR finals.